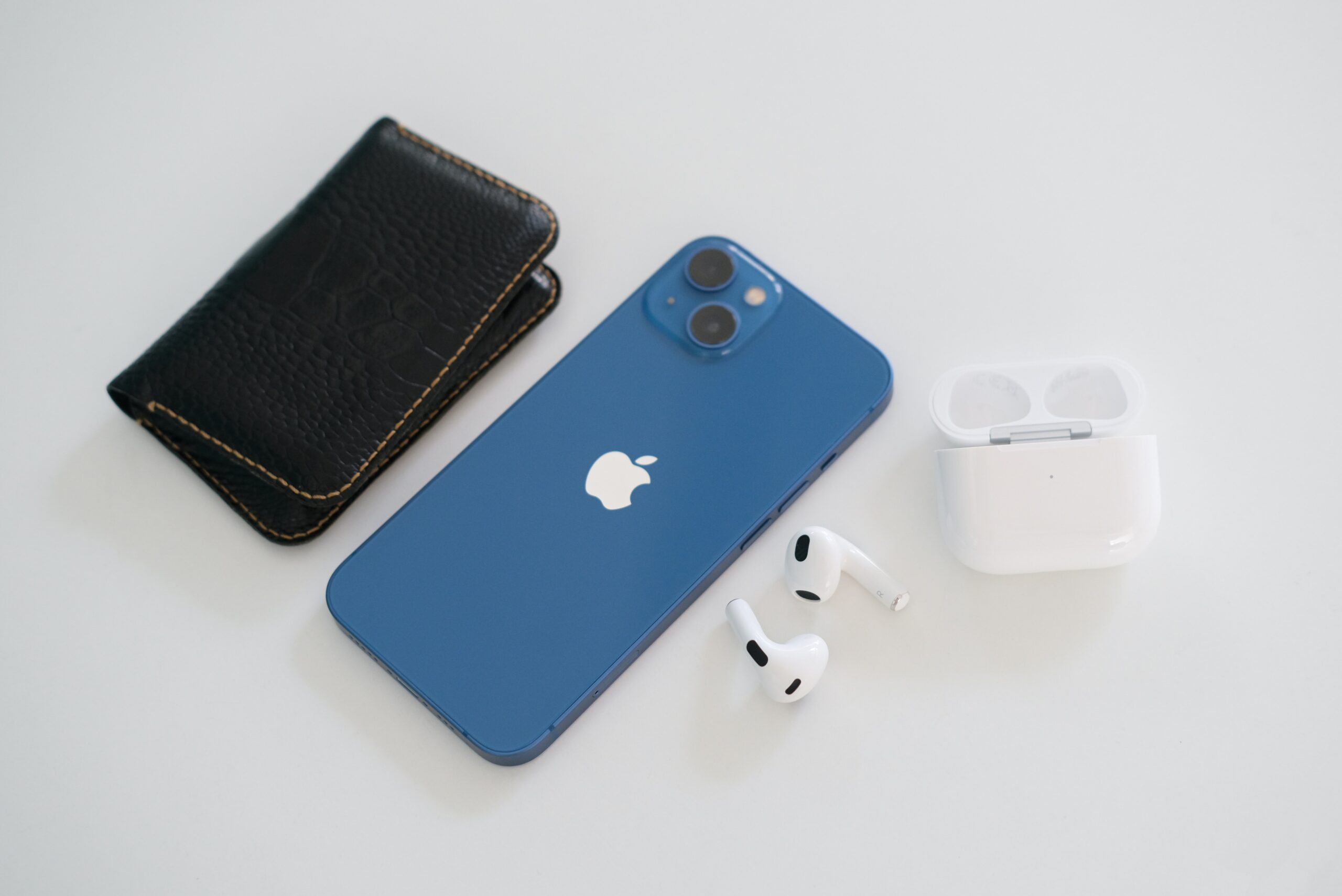 Should You Buy iPhone 13 for the Price it is in Kuwait?

Between the pro and the non-pro, there isn’t much difference outside of a few things that techie people will get. Like a high refresh rate, a zoom lens with macro, and the ability to shoot pro-res and raw, also the pro has a slightly bigger battery and more ram for day-to-day usage.

I can use the iPhone 13 and the iPhone 13 pro every day and I will not see any performance drop compared to iPhone 13 Pro Max. So why spend the extra money on the pro?

With that being said here is my long-term review of the iPhone 13.

Body and Overview of iPhone 13

So on the other hand, the iPhone 13 is a very comfortable phone for me it just feels right. So you have this squared-off design which I absolutely like that. Apple now is going more squared than curved which is cool to see.

You have a squared-off design where it actually allows the phone to stand up on its own. It is just a squared look which I really dig. Then of course everything else is pretty much the same.

You have the lightning port at the bottom with the two speakers. It has the bigger power button here and then you have your volume up and volume down. Then you have your notification rocker.

So the build is very familiar but it’s much more refined just how the phone feels in total and how it feels altogether. There are different colors with the iPhone 13 and depending on which model you’re looking at all the colors are different. I do like the color I have. It’s not like totally pink but it’s kind of a soft pink like a blush pink which I think definitely does look good If you’re into pink phones.

Obviously, we talk about the lenses too there’s an extra lens on the 13 pro. But for the layman’s or for the naked eye there’s not much that is going to be different for most people.

So I do love this size of a phone for a number of reasons.

The phone is still relatively one-handed-friendly. You still may need to shift your hand up and down and do certain things. But for the most part, it is a one-handed phone. I can do a lot of things on this phone with one hand that I can’t do with larger phones. Also, the screen to me is big enough where I can watch content.

I feel like the content is big enough where it takes up the whole screen and I have a good time watching it or if I’m playing games on the phone or anything like that. I think the phone is just a really nice size as I said before.

I think this is just a great balance between size and pocketability and usability.

In terms of Body and General Look and Feel, the iPhone 13 price in Kuwait is Justified.

Processor and Performance of iPhone 13

So the cool thing about the 13 versus the pro is that the 13 comes with the latest processor. As far as raw computing power, you’re not missing out on anything at all. I can edit videos, I can play games, I can do pretty much anything that I do on the pro version on this phone here.

This phone is hundreds cheaper too. So I get some of the same functionality, a lot of the same performance, and things like that from the cheaper phone.

Now for people who use phones, the majority of people use social media, text, and then we do cameras. So for those three basic things this phone does a great job at all three of those.

Since I talked about the camera we can dive into the camera.

In terms of Performance, the iPhone 13 price in Kuwait is Justified.

The camera is just like an iPhone camera we’ve seen before. Very simple!

Now that much has changed on the camera side.

For me, the big thing for the camera has to be HDR. I think hdr just looks a whole lot better on images, especially you’re taking a picture of a landscape. You can see the sky pop. You can see the grass pop. You know it’s not crushed the darks in the photos. The darks look good and I think the iPhone does a great job at letting dark areas remain dark. Like some phones like Samsung, they will lighten the darker areas. This phone will allow the dark areas to sort of stay put. Because the camera is also great at taking pictures of motion so a lot of phones like the pixel has this shutter lag. When you’re snapping pics back to back it starts going pretty slow.

Now even with video mode, even though it’s been the best for years I think it’s gotten even better. The cinematic mode which is portrait mode for the video I think it looks really good for what it is now. One of the best things about it is that after the fact you can adjust the focal points later on from now.

I have used this very phone and this camera and with good lighting and a steady hand, this camera looks good.

The audio is pretty good too I would say.

Pound for pound this is the best camera system available. Yeah, I think the pixels’ portraits look better. I think Samsung’s video is really good and stabilization is solid. But I think combined when you take a look at this camera what it can accomplish in total there’s not one weak spot.

In terms of Cameras, the iPhone 13 price in Kuwait is Justified.

Software and Apps Support of iPhone 13

For ios the app library is amazing. I know obviously, we talk about apps all the time but let me tell you when it comes to just high-quality apps ios still has the android beat.

Listen I love my android devices but a lot of apps side by side just do not compete. A lot of companies, if they don’t have a big team they’ll build an ios app first and then build the android app. So a lot of times the ios app gets a lot of the love first.

Even google apps are doing that too. Gmail gets more features before android does. So that’s just kind of one example.

I will say the app library is very nice on ios. Then I really like apple arcade there are a lot of really cool games on apple arcade. Yes, it is a paid service and obviously. Paying per month for games isn’t really fun. But let me tell you there are some games on here that are just fantastic to play that android just doesn’t have.

So ios 15 does still have bugs that need to be ironed out. There’s a lot of weirdness and wonkiness going on with the messaging system and I find bugs here and there. Apps crash and things like that so ios 15 is a little bit buggy right now.

That’s kind of uh kind of a bummer. Because you get a new device you start running into new bugs that you didn’t have for a previous device.

But it’s not the phone it is actually the os. But it does have these problems enough where I felt the need to mention it.

In terms of Software and Support, the iPhone 13 price in Kuwait is Justified.

So battery life to me I think is really good on this phone. I could take it off the charger around 7 am and I would stay around 11 pm, I start getting the messages that I’m at about 20%.

Now I’m a very heavy user and I am consistently on my phone. I may have a facetime call for 30 minutes or an hour. I do podcasts. I listen to music on Spotify. I do all those things that people will do on their phones that can take up a lot of battery.

So you know for me I think as long as the battery lasts throughout the whole day which it does I’m okay.

The pro has a bigger battery but I find pretty much the same battery life. The pro max gets more. Gets about two or three more hours of more battery life. But for the most part, I can’t kill the phone in a full day. Even when I use it all the time and I’m okay with that.

I will say I do love the MagSafe system. MagSafe is the magnet system that is on the back of the phone that allows you to connect different accessories.

I will say that the MagSafe works best when your phone’s not dying. But you put it on before your phone’s about to die, it kind of keeps your battery level at the same place. If you’re using it or if you’re not using it. It will start to charge it up that’s kind of how I use the battery pack.

But there are a lot of battery packs out there a lot of third-party companies are making ones that are much bigger than the one Apple offers.

But yeah I do like MagSafe and I like all the accessories that are coming out with it. I really like the mag safe system. It’s not new to the 13 but you’re seeing more accessories now that the 13 is out that supports MagSafe.

In terms of Battery Life, the iPhone 13 price in Kuwait is Justified.

Should You Buy one in Kuwait?

So rounding this review up.

I will say that the iPhone 13 is the most complete iPhone that I have ever experienced. I know it’s the latest iPhone blah blah blah but there is not a glaring issue with this iPhone. I have honestly felt like with most iPhones last few years there has been a glaring concern or something I really didn’t like about it. But I’ll say with the 12 and the 13 there hasn’t been much I didn’t like about it.

Now you have an option for that although it’s not available on the standard 13. Many people can’t tell the difference. So I’m not going to harp on that. But I would love to see a high refresh rate on the 13 regular too and not just the 13 pro.

Anyways if the 13 is not your cup of tea we definitely have articles for the 13 mini, 13 pro, and also the 13 pro max. If you want to check those out Subscribe to our mailing list.